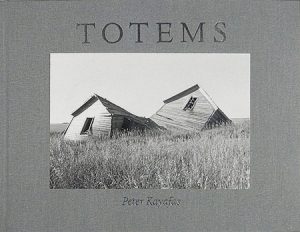 Peter Kayafas’s Totems, this engrossing collection of photographs of abandoned buildings discovered along the back roads of the American West, embodies to an exhilarating degree all photography’s habitual confounding of categories. It is precisely Kayafas’s refusal to insist on some sharp distinction between the photograph as a work of art and the photograph as a document that gives his work its particular potency. The Totems are, at the most fundamental level, records of structures that have been abandoned, bereft of human attention for decades. Some are domestic in nature and extremely modest in size. Others were built to serve as barns, schoolhouses, banks, libraries, and churches. Kayafas’s explorations of an endangered vernacular architecture are at once straightforward records and unabashedly poetic meditations, a matter of the photographer testing the quality of his attentiveness against the facts on the ground. The lyric impulse is sharpened by the documentary convention. Kayafas is a tireless explorer who has clocked thousands of miles in Nebraska, Wyoming, Idaho, Montana, and the Dakotas. In some instances the buildings he has discovered along lonely dirt roads are so far gone as to be near the point of vanishing entirely. His camera records a process by which flesh becomes spirit, the real house a ghost house. This is a moment in time in which time is running out.

—Jed Perl from the Introduction to the book

REVIEW: “Kayafas’s images have a timeless quality. They’re simple and spare, yet quietly overpowering with their evocation of a history on a scale beyond that of individual human lives.” The Boston Globe review by Mark Feeney of Peter’s Totems exhibition, January 21, 2012:

REVIEW: “Even the most dilapidated have character—the kind of pioneer spirit that refuses to accept defeat.” The New Yorker listing of Peter’s exhibition Totems, July 11, 2011: